In the previous blog post, we discussed the table layout mode, where the layout element is divided into a grid with a fixed number of columns and rows.

However, this may not be how we want to layout our UI. 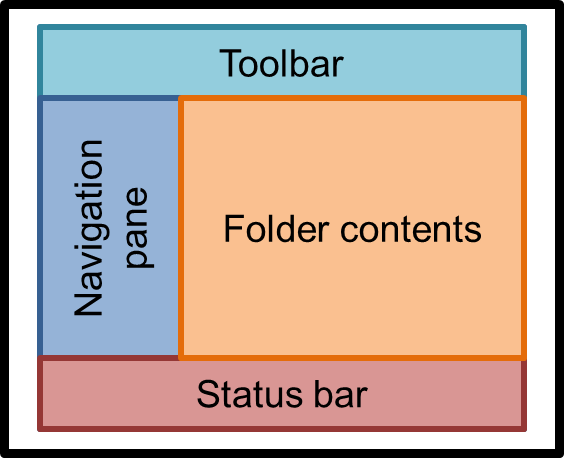 This layout would be more naturally achieved as:


(As a reminder, the "PUSH | EXPAND" flags will cause the cell to fill up the remaining space in that axis, and instruct the element to fill its cell. Therefore, when the window is resized horizontally, the navigation pane will remain fixed, while all the other elements grow, and when the window is resized vertically, the toolbar and status bar are fixed, while the navigation pane and folder contents grow.)

The layout we described above is a flow layout! Elements are laid out in rows, where each row has a variable number of cells. There are no columns between rows like in a table layout.

We need to be able to specify the flow direction. There are 4 options. 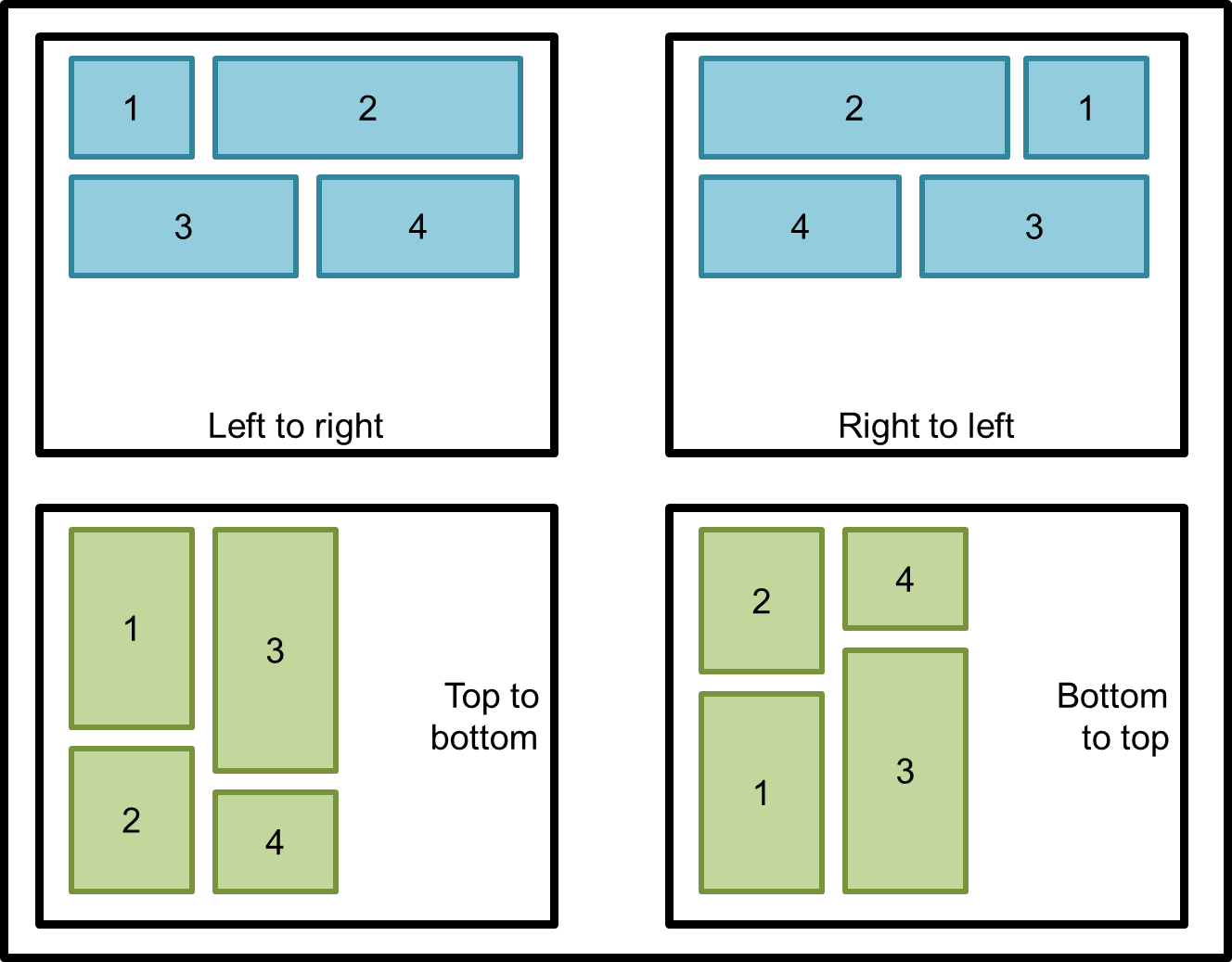 It's also likely that the programmer will want their layout to following the natural reading order of the system, so there are 2 additional flow directions:

These will be automatically assigned to left to right and right to left as the system's text direction changes.

From here on we'll assume that the reading order is fixed at left to right for simplicity.

In this example, a flow layout has 2 rows, each with 2 elements. 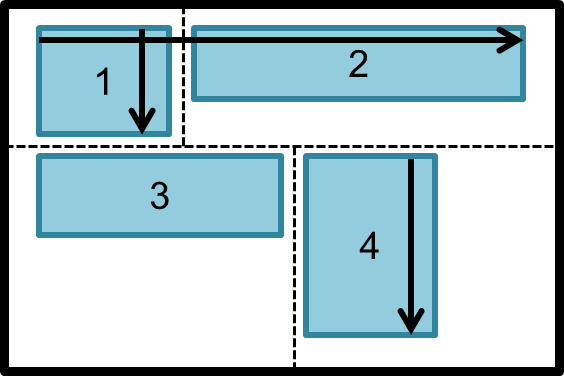 If no weighted element exists in a given row of a flow layout, then there may be some unused space at the end of the row. We discussed in the previous blog post overflow strategies, but now let's look at underflow strategies.

There are four underflow strategies. 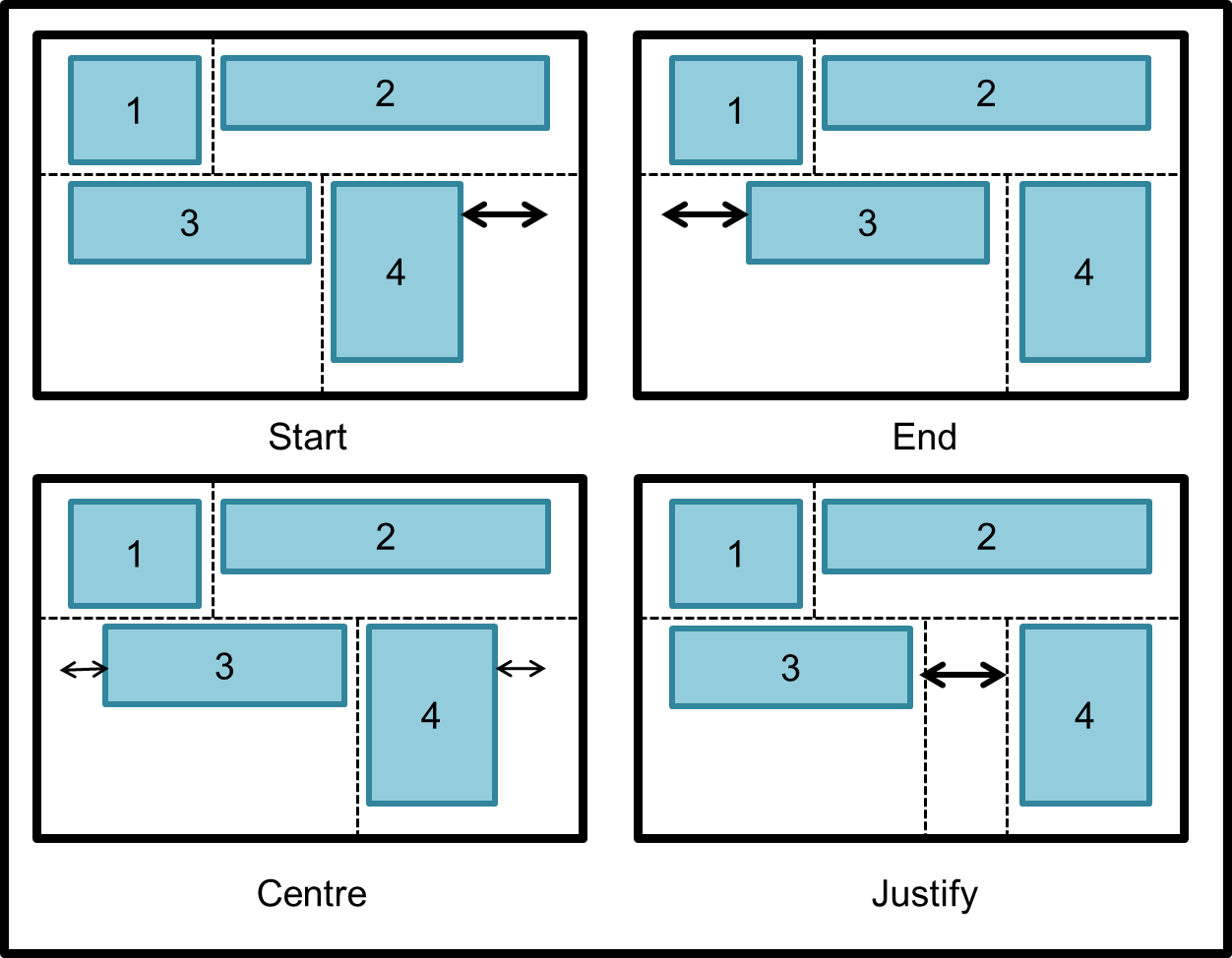 And as before, the vertical position of an element in its row may be controlled using alignment flags discussed in the previous blog post, OS_CELL_V_TOP, OS_CELL_V_CENTER and OS_CELL_V_BOTTOM.

The third and final layout mode is a modified version of the flow layout mode.

When a flow layout is larger than its given bounds, it'll employ one of the overflow strategies discussed in the previous blog post (clip, compress or scroll). Wrap layouts, on the other hand, move the overflowing elements onto a new row automatically. They can still be instructed to always start a new row before a certain element.

The introduction of wrapped layouts create an interesting problem: how do you measure them? In fact, how do you measure any wrapped element at all, such as a paragraph of text? The height of the element depends on its width! You can't just ask it to measure itself.

We need to introduce two special ways of measuring a wrapped element:

Unless the OS_CELL_H_COLLAPSE flag if is specified on an wrapped element, it will use its unwrapped measurement for its reported size. This is mostly not the desired behaviour, you can specify the COLLAPSE flag, and make sure that the element is in a weighted column.

The parent element must first work out the widths of each of its columns - only then can it send the measure with wrap limit message to the wrapped element. It can then find out the height of the element.

Let's look at an example. 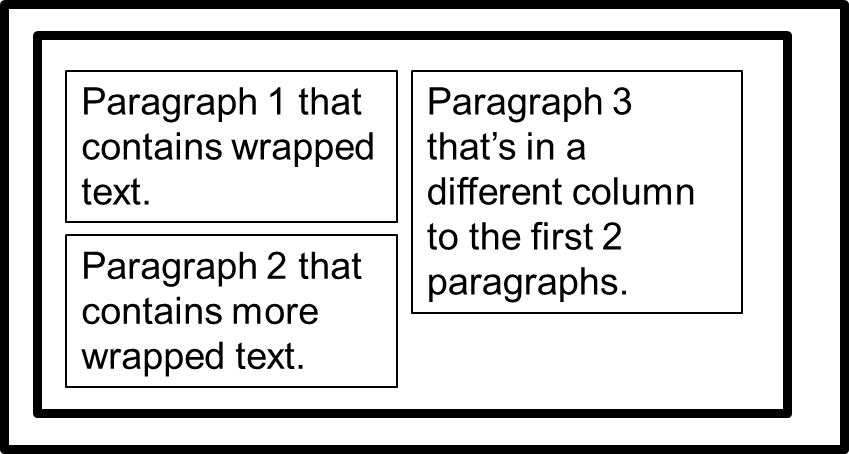 Here we have a top to bottom flow layout that contains 3 paragraph elements. Between paragraphs 2 and 3 an new column is started. The two columns receive equal weights. All paragraphs have the following flags: OS_CELL_H_EXPAND | OS_CELL_H_COLLAPSE.

First we start with the columns. As per usual, for each column we find the largest reported width. For both columns in our example this is 0px - since all the paragraphs have the H_COLLAPSE flag. We don't need to measure any of them. Let's say we have 300px of remaining space. Since both columns have the same weighting, this'll get divided up equally. Each column is now 150px in size.

The tallest column is the first column at 120px. The sum of the columns' widths is 300px. Therefore the layout element is 300px by 120px.

Try doing that with CSS.

So far we've assumed that we always wrap horizontally. That means when we reach a horizontal limit we move down vertically. However this is not always the case. For example, consider a wrap layout with a top to bottom reading order. It will automatically move elements into a new column once a vertical limit is reached. Therefore it wraps vertically.

Therefore we need to inform our parent element which wrapping axis we need, so that it lay out everything properly.

If we used the wrong wrapping axis, the following would occur:


By setting the wrapping axis in the parent layout element, we can correctly measure columns then rows, or rows then columns. Therefore when the latter is measured, the elements can be provided with the information gathered from the former.

I've labelled each element with a number here which we'll used to refer to them. 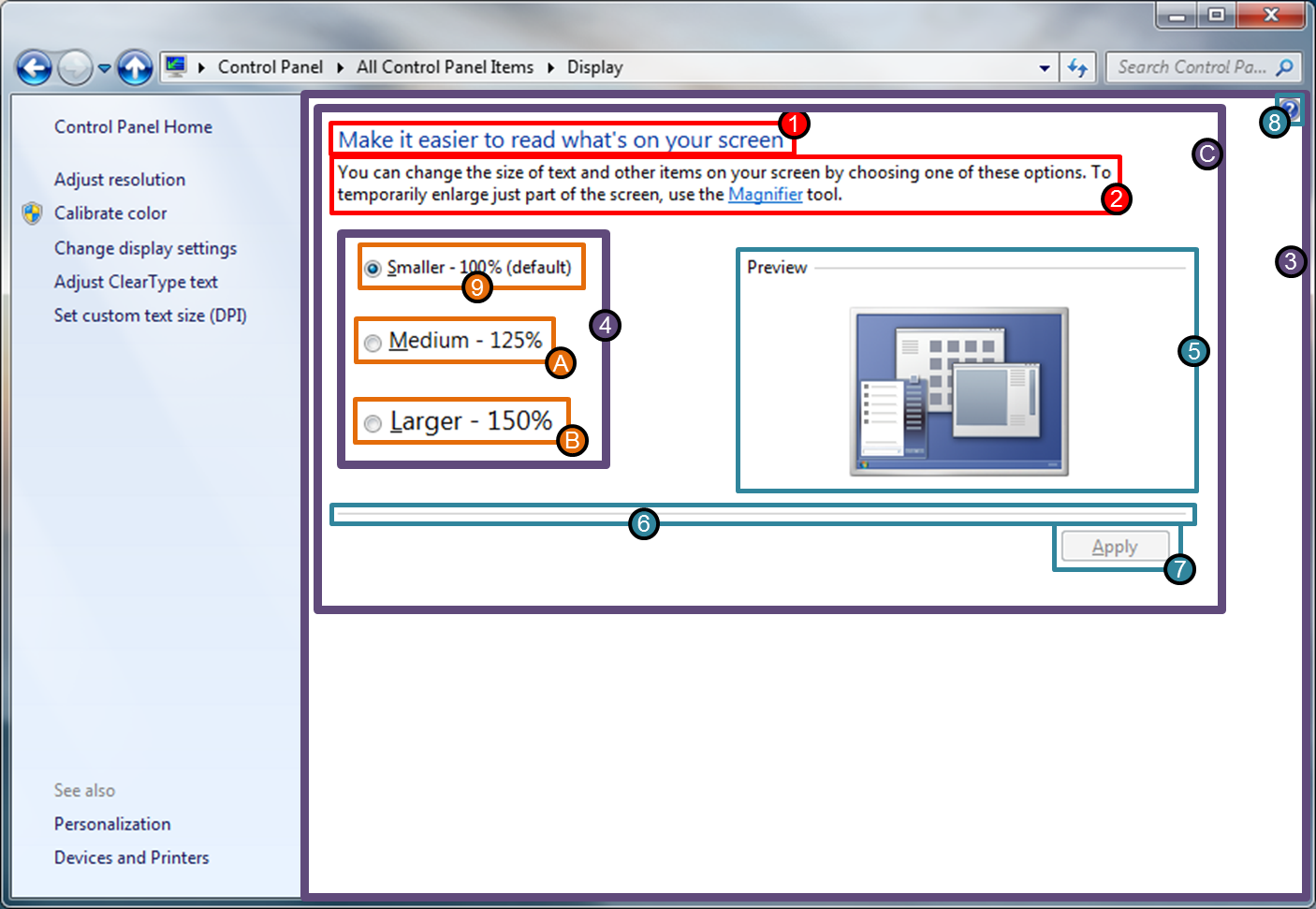 Here's how we'll refer to the type of each element:

We won't be considered the window frame, toolbars or the sidebars, since they're all fairly simple table layouts.

Make sure you've carefully understood the resizing behaviour shown in the gif, as we're about to attempt to recreate it.

At the root we have the layout 3 element. This is a flow layout with 2 rows. Its x-overflow strategy is compress, and its y-overflow strategy is scroll. In the first row (which uses the end underflow strategy) there is element 8, and in the second row (which uses the start underflow strategy) there is element 12. Element 12 has the OS_CELL_H_SHRINK flag so its minimum width is set to 0px, and has its maximum width explicitly set to 580px. These settings keep element 8 fixed at the right side of the screen, and element 12 at the left side, and when there is less than 580px of space it will start to shrink.

The layout 12 element is also a flow layout, with the x-overflow strategy of compress. It doesn't need a y-overflow strategy since its parent will always scroll to the necessary height. It has 5 rows. Rows 1 and 2 use the start underflow strategy, and row 5 uses the end strategy. In rows 1 and 2 paragraphs 1 and 2 are placed respectively. They have the OS_CELL_H_COLLAPSE and OS_CELL_H_SHRINK flags. They also are weighted. This means they will always take up the entire space of their rows. In row 5 (the last row) element 7 is placed. Its size is fixed. This row uses the end underflow strategy, to keep the element aligned to the right. In row 4 element 6 is placed. It has the OS_CELL_H_EXPAND and OS_CELL_H_SHRINK flags, and its weighted. Therefore it will take up the entire space of the row. Row 3 contains element 4 and 5. It uses the justify underflow strategy, and when it overflows it will use the compress strategy as noted above. Both elements use OS_CELL_H_SHRINK for when they are compressed after the justified space is gone.

Element 4 is the final layout element, also a flow layout. It has 3 rows, in which radio boxes 9, 10, and 11 are placed. They have the OS_CELL_H_SHRINK flags, but not the OS_CELL_H_COLLAPSE flags. This means they will only start word-wrapping after they get compressed by the parent layout's overflow strategy.

And I think that's it!

That's the end of these two blog posts. In the comments, please leave any questions you have - or any difficult layouts you don't think this system would be able to handle.

Thank you for reading!!
mrmixer
Simon Anciaux, 4 years, 1 month ago
In the example at the end, I found it weird that you used A, B and C in the screenshot but 10, 11 and 12 in the text. Also the numbering would be better in my opinion if it followed the "layout tree order" or the text explanation order. In the text I think it could help to have the screenshot closer to the text so we can refer to it without scrolling (or repeat the screenshot, possibly smaller since we don't need the whole window, with only highlight of the current paragraph).
pragmatic_hero
4 years, 1 month ago
This is a very good write-up on layouts!
Is this written in context of IMGUI or retained mode?

I feel that there's good ideas encompassed in vurtun/nuklear and Micha Mettkes UI work in general.
But it's written in a very terse code style where it's hard to extract those ideas out of it.
ratchetfreak
4 years, 1 month ago

pragmatic_hero
Is this written in context of IMGUI or retained mode?

My UI library is retained, but I think RMGUIs and IMGUIs have different advantages when it comes to layouting.

Immediate mode makes it effortless to completely change the layout based on certain factors. For example, here is how you might merge 3 buttons into a menu when the window's width goes below a certain threshold.

This would be annoying to implement in retained mode, since you have to handle window resize notifications, and appropriately destroy and create controls when the boundary is crossed.

Retained mode makes it perform calculations on the UI far easier. For example, when making a table like the following...

...all the labels in the first columns need to be measured before any of them or the textboxes can be inserted, since their layout is dependent on the length of the longest label. To do this in an IMGUI, you need to make multiple passes over the entire program's UI every frame. And it only gets even more complicated when you introduce wrapping elements, where height is a function of width (or vice versa).
pragmatic_hero
4 years, 1 month ago Edited by pragmatic_hero on October 9, 2018, 8:05am


Yes, exactly.
Some layouts are just way more complicated to do in IMGUI vs retained mode. Which is why I'm asking.

Nakst, the main reason for IMGUI (for me at least) is that IMGUI code can be trivially hotswapped. If I didn't value hotswapping as highly, retained mode is certainly more straight forward to implement and understand (especially the layouts!)
Log in to comment