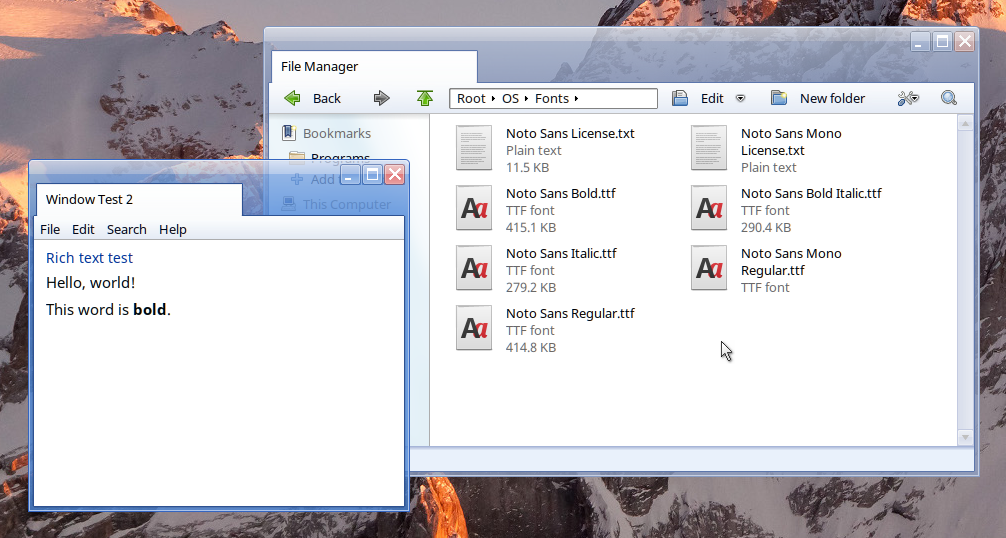 The OS currently uses FreeType for text rendering. Although I originally used stb_truetype, it unfortunately was not able to produce text of comparable quality to other modern operating systems. This lead me to porting FreeType to the OS. In this blog post I'll explain how building and porting FreeType works, which'll hopefully help people implement it into their own programs.

FreeType can be downloaded from their website, www.freetype.org. I haven't yet updated to version 2.9.1 (still using 2.9), but it shouldn't matter which version you download. Once you've got the source, all you need to do is extract it. The OS's build system automatically downloads and extracts the source in these three UNIX commands:

FreeType is a large library with support for many different features, most of which you probably don't need. Luckily, the main configuration for the library is split into only 3 files (I'm looking at you, GCC!). The build system automatically patches all three of these files after the source has been downloaded.

The first is modules.cfg, which allows you to enable and disable different features. Features are written in the form FONT_MODULES += .... You can disable the ones you don't need by placing a # at the start of the line. Here is the full list of modules we disable, in addition to the disabled-by-default modules:

You don't have to disable all of these if libary size isn't a concern, but I wanted to keep it as lightweight as possible.

The final file we patch is ports/freetype/src/include/freetype/config/ftstdlib.h, where FreeType gets the names of C runtime functions from. We have a lightweight set of these functions in the OS API, prefixed with OSCRT-, so if a program doesn't want the C standard library, it won't have to link to it. We redirect all the functions in this file to our versions.

At the start of the file, I include the OS API's header file. We have to declare some additional defines so we can statically link FreeType with the API. Sadly, I can't remember how many of these are still necessary since the API has been through several refactors. If you're building FreeType on another platform you shouldn't have to worry about all this.

After that, I comment out all the C standard library header inclusions, e.g. // #include <stdio.h>, and changes all the defines to use the OSCRT- prefix, e.g. #define ft_strrchr OSCRTstrrchr. If you want to use my lightweight reimplementation of all the C standard library functions needed to port FreeType, look at api/crt.c of the OS's source. I'm doubtful whether you can copyright such simple implementations of such generic functions, but it'd be nice if you credited the project if you used these functions.

Now that we've configured FreeType we can build it. This is a simple configure followed by make, although I have to add a few extra flags because I'm cross-compiling.

When configuring I inform it of the cross compiler and all the no-cstdlib releated flags. I then tell it to not use any dependencies. I pass ANSIFLAGS="" to the makefile, so it doesn't complain that my OS's header isn't compatible with whatever version of C they used 100 years ago. I also pass > /dev/null/ so only errors are reported. Much quieter. If everything built correctly, you now have a new shiny static library in objs/.libs/libfreetype.a, and headers in include/. If it didn't build correctly, please don't ask me why, because I have no idea.

Once you've build FreeType, linked your program to it, and added its include path, you can now start actually using it.

In your soruce file, first include the FreeType headers. For some reason you have to include ft2build.h, sine it defines the path of the header file you actually want to include. There's probably a good reason why (there isn't).

Since we built FreeType without access to C's stdio functions, we can load our fonts ourselves.

We then can initialise FreeType and load our fonts into it.

Good news! We are finally render to actually render glyphs from our fonts.

We can then extract some information about the glyph that we need.

Then we can store the glyph's data in our cache. The OS caches the last 256 glyphs it sees, storing their size, character and font. If a glyph is already in the cache, it won't go to FreeType to render it. We need to shift the color channels around to get them into our desired format, and when also reduce the effect of the subpixel antialiasing to prevent the appearance of color fringes.

Instead of implementing HTML5 like other modern UI libraries for rich text, I've started to work on my own simple rich text format. At the moment, the code is fairly work in progress, but let's take a short look at the markup format.

The format uses '\v' (vertical tab) and '\f' (form feed) to open and close a tag by default. Since these characters are non-printable, you don't need to worry about escaping certain characters in your input. And instead of having seperate open and close tags, you put the text your marking inside the tag instead.


A single space after the tag name indicates where the marked text starts. Tags can also be nested, as you'd expect.

I know I'll definitely want lists, tables and images in the future, but I'm not exactly sure where to draw the line before I end up with something like HTML/CSS. If people have any thoughts about rich text, I'd be interested to here them. I'm fairly happy with how it works already (although the code need a rewrite), and have been using it in the File Manager to change the color of text in list view item labels.

I thought I'd also briefly talk about SVG icons here, since they share the glyph cache with text glyphs. The OS currently uses a mix of bitmap Tango icons, and the SVG elementary icons.

The icon_pack file format is incredibly simple. At the start of the file, there's a list of filename hashes and file offsets. After that is the uncompressed pre-parsed data, directly saved from the output of nanosvg. This makes it very quick to load. I can then render the icons using nanosvgrast. You can get nanosvg and nanosvgrast here.

Thank you for reading this blog post! I hope it helps more people get high-quality text into their programs using FreeType. If you have any thoughts about how I should implement rich text, please leave a comment, as I'm interested to here them.

1) no need for FT_CONFIG_OPTION_USE_LZW - lzw in freetype is self-contained code, does not depend on external libraries.

2) no need for FT_CONFIG_OPTION_USE_ZLIB - freetype has zlib source in its distribution which is used when system zlib is not found.

1. 2.
Are these features necessary to render many fonts? I haven't had any problems with the truetype fonts I've tested so far, and I'd rather keep the built library as small as possible.

3. 4.
I don't pretend to understand the Unix command line and I appreciate the help, but it's probably easier for me to know how the code works when I come back to it later if things are a bit more verbose.
mmozeiko
Mārtiņš Možeiko, 3 years, 1 month ago Edited by Mārtiņš Možeiko on December 17, 2018, 10:52am

No idea if anybody uses lzw and zlib. Freetype has also bzip2 decompression code (that depends on external libbzip2). Comments in source code of these three components actually suggests that this compression is used in PCF files that comes with/for X11. Not in ttf.
BillDStrong
Bill Strong, 2 years, 5 months ago
Why don't you just use a MD derivative, such as CommonMark? Then all text files are plain text, and you don't have to recreate HTML and CSS. You can then specify some theme presets, such as a Dark theme, and themes for those with seeing impairments. You could specify fonts built for the Dyslexia impairment, or size for older eyes. (Honestly, we could replace 90% of the web with that now, if we got rid of the javascript ads, NetFlix and YouTube.)

MD includes the most common markup scenarios, including links, images, video, tables, lists, Headings and others.
nakst
2 years, 4 months ago Edited by nakst on September 1, 2019, 3:49pm

BillDStrong
Why don't you just use a MD derivative, such as CommonMark? Then all text files are plain text

I am not writing a document typesetter! This is more use *within* programs' GUIs only.
In fact, having a plain text format is objectively a bad thing for this case, since it makes escaping user input far more harder.

BillDStrong
you don't have to recreate HTML and CSS

CommonMark supports inline HTML, so, no, I would have recreate HTML and CSS.

The rich text format I described in this article integrates very nicely with the existing GUI layout and styling systems, so I haven't needed to write much code to implement it.

BillDStrong
You can then specify some theme presets, such as a Dark theme, and themes for those with seeing impairments. You could specify fonts built for the Dyslexia impairment, or size for older eyes

The Essence UI already supports all the styling features you have described here.